I did some reading on time credits, which my team is planning to adapt in our final project, 1our.

Time Banking was initially popularized in the US by human rights lawyer Edgar Cahn in 1986, when “money for social programs dried up” and no dominant approach to social service in the US was coming up with creative ways to solve the problem, and the term ‘Time Credits’ were coined by him. The first time bank was started in Japan as early as 1973 by Teruko Mizushima, where she had foreseen problems of an ageing society in the 1940s(!).

Spice (justaddspice.org) is based in the UK and is one of the more popular developments of the Time Credits concept, where:

“for each hour that an individual gives to their community or service, they earn a Time Credit. These credits can then be spent on an hour’s activity, help from another individual, or gifted to others.”

Given this association with time credits and social work, it may make sense to apply time credits to social work instead of just a general listing of work or odd jobs. MCI seems to have the same idea in the ICT masterplan preliminary ideas, but it seems that it hasn’t materialized. In Singapore, it seems more volunteers are needed in some areas like the elderly

Is / will there be demand?

An issue may be that people just “don’t have the time”, especially in busy Singapore.

With regard to volunteerism, youths may not want to volunteer. Still, first on the list of goals in the survey were maintaining strong relationships, and third was learning new skills and knowledge. Time credits have been shown to exactly meet these needs, and seems to me more meaningful and useful than CIP hours.

With 43 per cent of those aged between 15 and 24 served as volunteers in 2012, and the number rising, our project may add more meaning to the somewhat top down and forced CIP volunteerism. Of note is that the rates of volunteerism drop for working adults who concentrate on building their careers, so we can probably rule them out as our main target audience.

It has been found that most may just want to give money instead of time. Again this would apply to the general working population, so maybe we should focus on people who are still studying and those who have retired, who have the most ‘free time’.

Is there time for us?

Spice has an extensive list of partners and backing from the local government, but for our 2 month project perhaps we could focus on validating the idea instead of trying to scale it to many organisations. Some suggestions are to start small, with activities the community is familiar with

Here’s some preliminary designs that Irvin and I came up with for 1our, a platform for volunteers, businesses and causes to show appreciation through time credits: 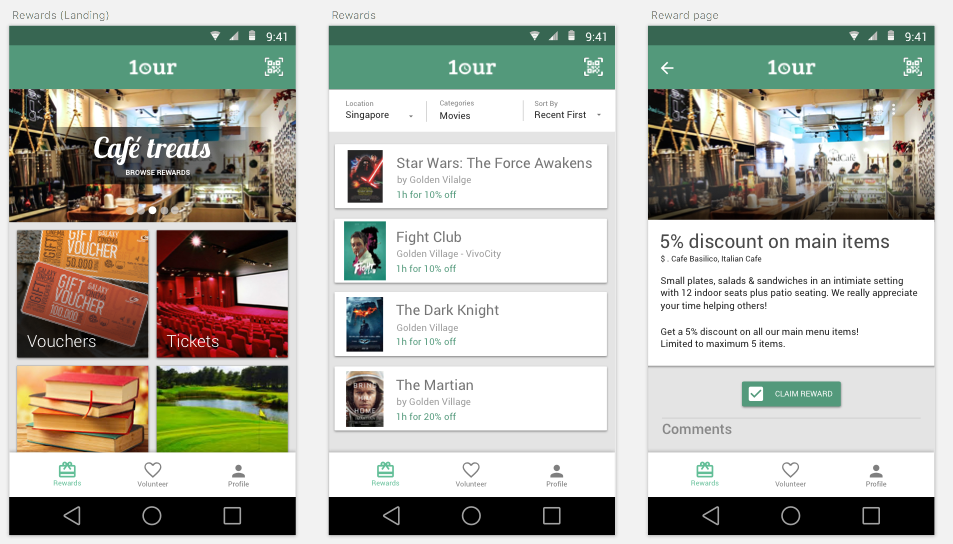 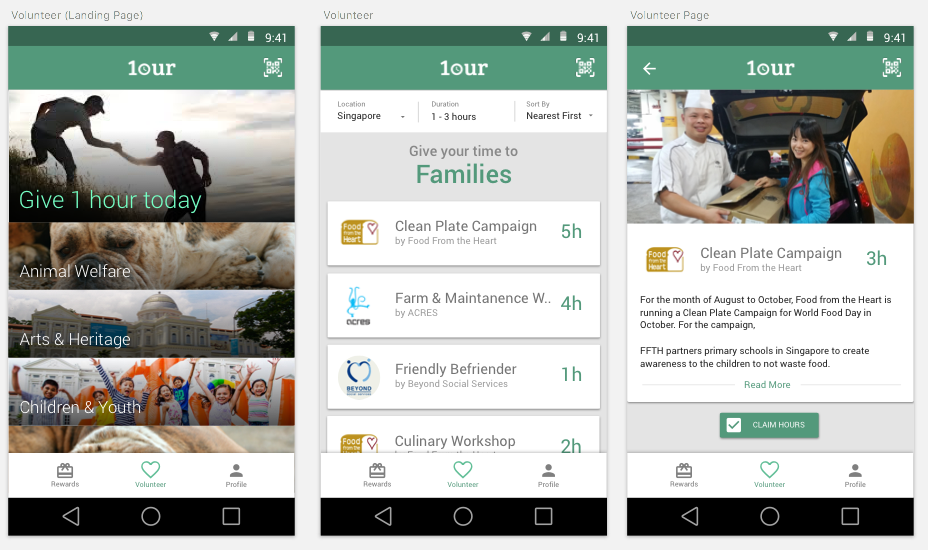 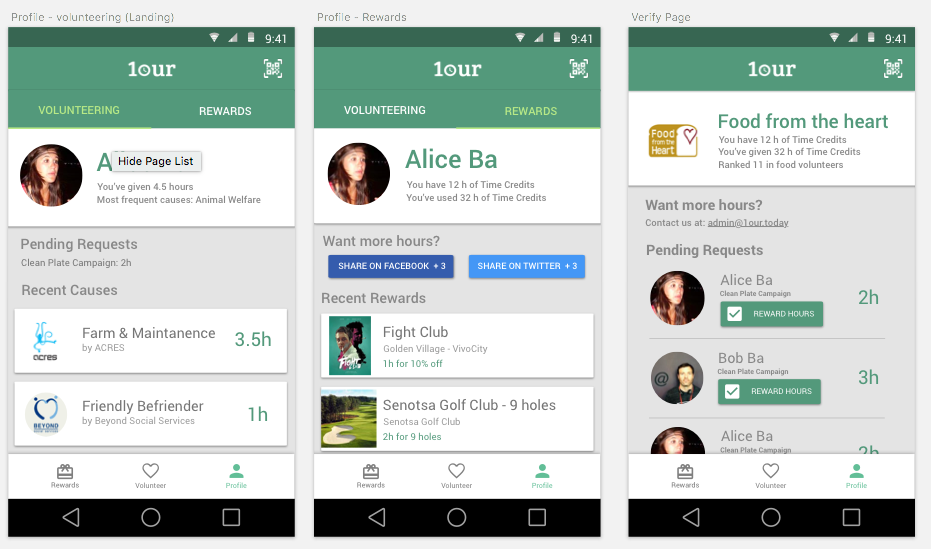 During the past week we’ve talked to a few people, besides Colin, who were involved with our main user group, volunteers, in various ways about the idea of time credits and got some valuable feedback on the idea.

The first was Prof Sun Teck, who pitched his idea about reaching out to ‘at risk’ users on social media. In the end both our groups’ and his idea had different objectives, but he was willing to give us contacts to people who managed volunteers that he knew, and suggested people who were doing CIP as they may want other incentive. His group also questioned whether the time credits would de-value volunteer work, the idea that extrinsic motivation would crowd out the intrinsic motivation of the satisfaction and relationships formed through volunteering work.

We also contacted Mr Moh Hon Meng, founder of hoodchampions.sg, whose blockpooling.sg was similar to our initial idea. Being on the board for the children cancer foundation, his insights were quite useful too, and he also offered to link us up with some of the volunteer managers he knew to help us test the app. From our conversation, his opinion of the nature of volunteering was that for younger volunteers it was more on an ad-hoc basis, and VWOs (Voluntary Welfare Organisations) were trying to adapt to cater to more ‘on demand’ volunteering, in contrast to long term commitments from older volunteers, and that the whole process of verification of hours volunteered was manual, tedious and a problem worth looking into as we could add real value, in terms of saving costs and increasing the volunteer pool for VWOs.

Also, he cautioned against doing material rewards as he felt that for volunteers the rewards were less material, and more psychological - from his experience the interaction with children, appreciation from the VWOs, also of the general trend of employers hiring based on more than grades, but also looking at things like social consciousness. Some ideas for additional rewards for VWOs, in addition to number of volunteers and exposure, from our discussion also were to improve the interaction with volunteers, like leaving messages or positive testimonials for each other.

Lastly, Xu Jie also contacted some of the social oriented clubs and societies in NUS, as they could be our potential users as well. Some feedback we got were that, it would be useful for VWOs although the current idea requires employers to verify the hours on our platform, also that time credits could take away the spirit of volunteerism, and tasks for helping out in your own community would be helpful.

From the above feedback we concluded that rewards may not be desirable, in a way it lightens our load as Colin was afraid that the marketing effort would be too much as we had to go and pitch to merchants also and the rewards that we would get may not be that attractive.

Still, I believe that building the prototype and getting the end-user feedback would be more important, and to see what they do instead of what they say aka the first rule of usability. Starting usability testing asap would be useful to iron out our features, and tailor it to the problems that volunteers and VWOs would face.

So in the end we abandoned this idea, but looking back, I think putting this on the blockchain is going to be pretty interesting. This then, is the idea for the Smart Contract - donors fund organisations, which fund volunteers, which then spend on organizations. This can be on a consortium blockchain, who will be incentivised by better accountability rather than block rewards, anyway if it is a low value token, would public nodes have incentive to mine it?

Cons - ‘Money-minded’ volunteers - Solution: Only allow spending of tokens at select VWOs, reinvest in charitable organisations - Authorization of nodes: so, who gets to be in the consortium? I’d say the authorities.